On October 19th, 1864, approximately 20 Confederates who had quietly crossed the border from Canada, robbed three banks in St. Albans, Vermont, and attempted to burn the town before escaping back to Canada. You can read details of the St. Albans Raid here. The Raid is a 1954 film based on that incident in the Civil War. While the film does get some things right about the St. Albans Raid, there’s also a lot of embellishment and fictional aspects about it, which is not unusual for a non-documentary movie about a real life incident.

The raiders were Confederate prisoners of war who had escaped to Canada, and were led by Lieutenant Bennett H. Young, a 21 year old Kentucky cavalryman who had been captured during John Hunt Morgan’s 1863 raid into Indiana and Ohio. While the film opens with a dramatic escape of a group of Rebels from a POW camp in Plattsburgh, New York, Young actually quietly escaped from Camp Chase, Chicago, as did some others who participated in the raid. The participants both in real life and the film eventually got together in Montreal which was a center of Confederate spy activity. Bennett proposed to rob the three banks in St. Albans, 15 miles south of the border, in order to get money for the cash strapped Confederacy; he also wanted to burn the town in retaliation for General Phil Sheridan’s destruction in the Shenandoah Valley. In the film, the burning of the town was to be in retaliation for General William T. Sherman’s destruction, but his March to the Sea did not begin until mid-November. 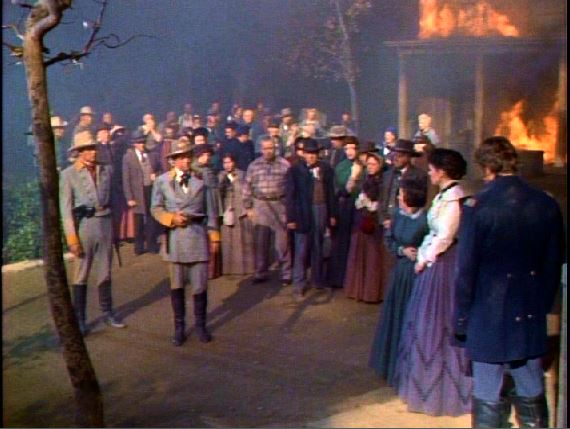 St. Albans Townspeople Under Guard in “The Raid”

The leader of the raid in the film is the fictional Major Neil Benton, played by Van Heflin (who at 46 was more than twice the age of Bennett Young). Benton arrives from Canada to scout St. Albans, using the cover story that he is a Canadian businessman, looking for opportunities for land purchases. Bennett Young did indeed make scouting expeditions to check out the town, although his cover story was that he was a theology student. Young (and Benton) were successful in gaining the confidence of the locals. The other raiders came down from Canada in groups of two or three, with cover stories of various types such as being hunters, fisherman, or tourists.

St. Albans Bankers Forced to Swear Allegiance to the Confederacy in “The Raid”

The Confederates robbed all three banks simultaneously. In at least one of the robberies, the bank employees were ordered to swear allegiance to the Confederacy. Townspeople were herded into the town square and guarded. The film does a pretty good job with these events. After catching on to what was happening, some of the St. Albans people got out their pistols and hunting rifles and started taking shots at the raiders, but the only one we see shooting at them in the film is a Union Army captain played by Richard Boone (Casualties in the raid were one civilian killed and two wounded, and one Confederate was wounded). When it comes to burning the town, the Rebels brought along glass containers of Greek Fire, an incendiary concoction that goes back to ancient times, although the exact chemical composition has been lost to the ages. The Rebels in the film do indeed set the downtown buildings on fire with the stuff, but in real life, the formula was apparently not optimal, and with it being a damp fall day in Vermont, there was mostly smoke, little fire, and not much damage. The raiders were able to make good on their escape by stealing horses from the livery stables and setting fire to a covered bridge outside of town on the way back to Canada, closing out the film. 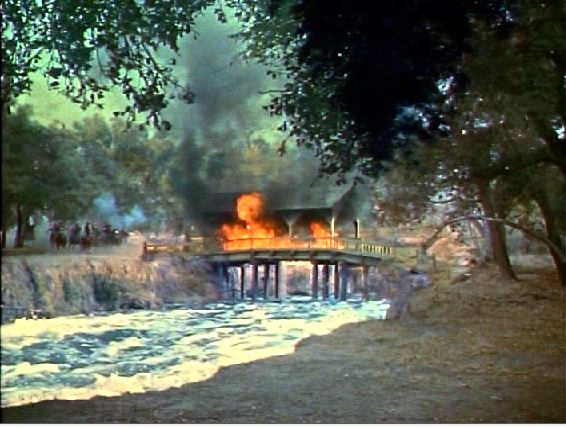 St. Albans Raiders Setting Fire to Covered Bridge During Escape in “The Raid”

The movie also stars Anne Bancroft, as a war widow that Major Benton is somewhat smitten with, and a young Lee Marvin. Marvin portrays a loose cannon psycho who almost blows the mission’s cover, which reminded me of his performance playing a similar character in the 1962 western “The Man Who Shot Liberty Valence”. Other familiar faces who went on to successful careers in movies and especially in television, include Peter Graves, James Best, William Schallert, and Claude Akins (the latter two are uncredited).

Though it takes more liberties with the facts than I’d like, it’s a fairly entertaining film and worth watching as long as one understands how the real St. Albans Raid went down.