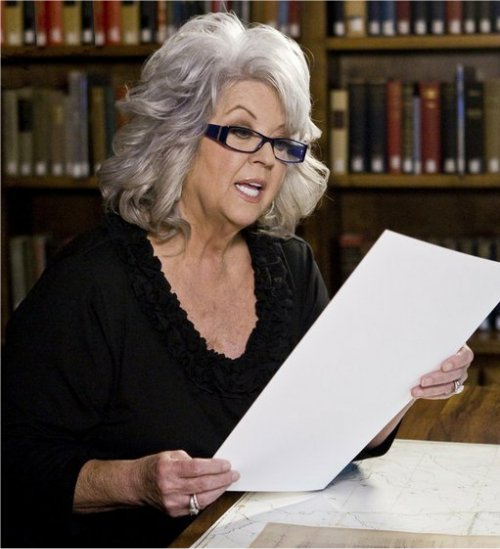 Celebrity chef, Paula Deen, traced her Georgia roots back to the Civil War on “Who Do You Think You Are” (May 18, 2012). Celebrated for her southern home style cooking as well as her cookbooks. Paula recalls her own life and happy childhood. Then at age 19, tragedy struck when her father died at the young age of 40. Her mother followed 4 years later and Paula developed agoraphobia, a fear of leaving the house. After her marriage failed, she found both solace and her calling in life in her kitchen.

Paula Deen was born in Albany, Georgia on January 19, 1947 (also the 1809 birthday of Edgar Allan Poe). Now a resident of Savannah, she traveled back to Albany to meet up with her Aunt Peggy and find out more about the Paul side of the family. Her mother’s maiden name was Paul and that is where her first name came from.

She learns that W.B. Paul, her great-great-grandfather and his wife, Eliza Batts, had her great-grandfather, John Liddle Paul, in 1860. She meets with genealogist Nathan Matthews at the Georgia State Archives and they look up an 1870 census on Ancestry.com. John Liddle Paul is 11 years old and living with John and Mary Batts. They go back to an 1850 Census to confirm that John and Mary are John Liddle Paul’s maternal grandparents. Before the Civil War began, John Batts was a wealthy plantation owner and an important person on the local political stage — a judge, a representative and a senator in Lee County, Georgia.

Paula meets with John Wilson, Professor of History at Georgia College in the old legislative chamber where her ancestor met with his peers to discuss and pass legislation. “This is 150 years later. My hiney could be in his chair – that’s crazy!” she exclaims.

Paula learns John and his peers threw their support behind James Buchanan’s vice-president, John Breckinridge, in his bid for presidency on a pro-slavery platform. The historian explains to Paula that John Batt’s personal wealth of $32,000 (not including the $17,500 he owned in real estate) would be equivalent to about a million dollars today. Paula is very impressed until the historian explains that kind of money in pre-Civil War terms usually meant he was a slaveowner. She is shocked and mortified when the records reveal that John Batts owned 35 slaves.

With the help of Dr. Rachael Shelden, asst. professor of American history, Paula determines that John’s son, William, went to war at about age 22 and joined the 12th Georgia Volunteer Infantry. The archives have some remarkably preserved correspondence from William Batts to his father and sister. It tells the tale of a young man who goes into service fully expecting the dispute to be over without seeing much action. But William is sent from Richmond to Camp Allegheny, Va. As time progresses, his hopes of returning home fade. He is hospitalized in Virginia in June of 1862 after being struck by a ball in the leg. He speaks of returning to duty, but after that there are no more letters from him. In a transcription of a later letter from William’s commanding officer, Shepard Green Pryor, written to his wife on August 9, 1862, ‘Billy’ Batts and Thomas H. L. Tinsely are mentioned as two casualties in an unnamed skirmish. “Billy and Tom were buried as soldiers. I had their graves marked. I guess they will never be moved as they had no coffins,” Pryor wrote. This particular letter is also referenced in Stonewall Jackson at Cedar Mountain

with regard to how the regiments buried their fallen comrades. Pryor’s wife went to visit the Batts family and reported to her husband that John Batts took his son’s death very badly.

After the civil war ended, John Batts had to to apply for a pardon to President Andrew Johnson for the crime of treason and had to swear allegiance to the United States. He also had to provide proof that he had freed his slaves and was now paying them a fair wage. Only wealthy slaveholders were required to apply for official pardons. Everyone else got a blanket pardon.

Paula’s next stop is Emory University where Dr. James Roark, Professor of History, helps her find out how John Batts made out after the Civil War after losing his son and his way of living. In 1873, a massive depression began, and by 1879, Batt had lost just about everything. He committed suicide. He shot himself in the head with a pistol. Paula feels he could have survived his financial reverses were it not for Billy’s death. She winds up her trip with a visit to the area near Smithville, Georgia, where John Batt’s plantation once stood. Nothing is left but some bricks that Paula thinks is from the fireplace where they cooked.

Paula goes home and tells her son about this sad chapter in their family history. She pulls no punches when she tells her sons about what a shock it was to learn that John Batts was a slaveowner. “You cannot own a man,” she says, “you cannot do it.”