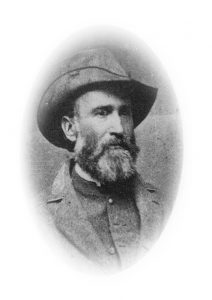 Following his defeat at the Third Battle of Winchester, Virginia, on September 19th, 1864, Lieutenant General Jubal Early withdrew his Confederate Army of the Valley some 20 miles up the Shenandoah Valley to Fisher’s Hill, near the town of Strasburg. Early set his defensive line up with his right flank on the Massanutten, or Three Top, Mountain and the North Fork of the Shenandoah River. Early had four infantry divisions deployed from Three Top extending west along Fisher’s Hill, and into a valley between Fisher’s Hill and the elevated ground of Little North Mountain, with Major General Lunsford Lomax’ dismounted cavalry division covering the left flank at Little North.

Major General Philip Sheridan’s Army of the Shenandoah, consisting of the 6th and 19th Corps, supplemented by the two division Army of West Virginia under Major General George Crook and three 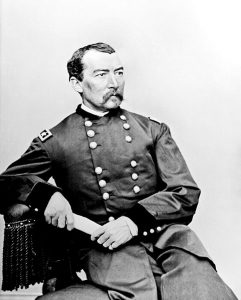 cavalry divisions, wasn’t far behind and began to arrive late on the 20th. The 6th and 19th Corps occupied ground just outside Strasburg, between the town and Fisher’s Hill. Crook’s divisions were deployed further north, concealed in heavy timber. The Federals had a big advantage in troop strength, with about 35,000 on hand while Early had only about 10,000. Sheridan called a council of his generals (Crook, Major General Horatio Wright of the 6th Corps and Major General William H. Emory of the 19th Corps) that evening to discuss a plan of attack.

The generals all agreed that a frontal assault was out of the question, even with superior numbers, due to the steep climb and fortified Rebel lines. Crook proposed a flanking attack against the Confederate left using his divisions, which were on that side of the field and could be moved into attack position under the cover of the trees and terrain. Once in position, Crook could attack, ideally by surprise if the Federals had not been spotted while moving into position. The 6th and 19th Corps would threaten to attack the Rebel front, keeping Confederate interest in that direction while Crook maneuvered. As Crook caved in the Rebel left flank, the 6th and 19th Corps would then attack from that direction. Although there was some dispute over how much of this plan was Crook’s idea and how much was Sheridan’s (who took most of the credit) the commanding general endorsed it.

Late in the morning of the 21st, the 6th and 19th Corps units formed in marching order and began the movement to deploy in lines in front of Fisher’s Hill, seizing an important piece of high ground called Flint Hill, from which Sheridan would have an unobstructed view of the Confederate lines. After dark, the Federals moved into position in front of Fisher’s Hill, with the 19th Corps on the left and the 6th on the Union right. 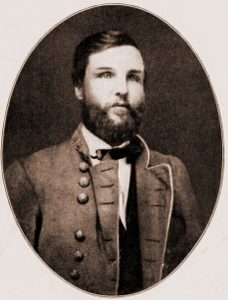 On the morning of the 22nd, Sheridan ordered his troops in front of Fisher’s Hill to distract the enemy while Crook marched around Little North Mountain and into position to attack the Rebel left flank. At about 4:00 pm, Crook was in position and attacked, slamming into Lomax’ dismounted cavalrymen in complete surprise. Most quickly headed for the rear. Major General Stephen D. Ramseur, whose infantry division was on Lomax’ right turned a brigade to face the Federal onslaught, slowing the advance temporarily. But as Crook was hitting the flank, the 6th and 19th Corps units in front of the Rebel lines joined in the attack. Crook’s force advanced from west to east, and after putting up some resistance, the Confederate units broke for the rear as the Federals hit them from two directions. The routed Confederate forces retreated up the Shenandoah Valley, continuing to retreat well after dark. 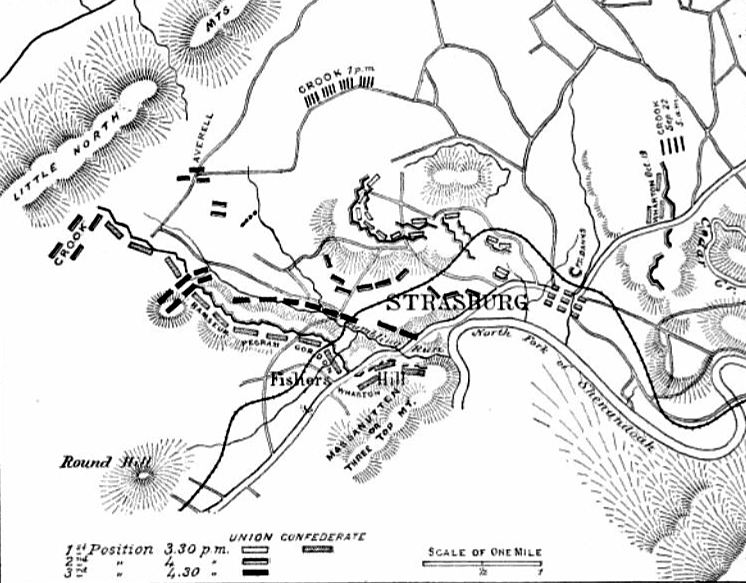 Map of the Battle of Fisher’s Hill

General Crook submitted this report on his command at the Battle of Fisher’s Hill:

COLONEL: I have the honor to submit the following report of the part taken by the Army of West Virginia in the battle of Fisher’s Hill, September 22, 1864: 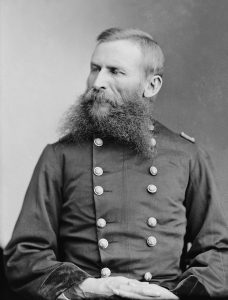 On the morning of the battle I was ordered to conduct my command under cover to a point near the North Mountain, and close to the enemy’s lines, for the purpose of turning his left flank. This point was near the right of the line of the Sixth Corps. About 2 p.m. I received instructions to move my troops, still unobserved, to the eastern slope of North Mountain, and to pass around the enemy’s extreme left and get on his flank and rear and drive him from his works. I arrived at the base of the mountain, unseen by the enemy, by marching in ravines and through woods. There I formed my command in two columns, parallel to each other, and marched them by the right flank along the side of the mountain under cover of the woods, until more than half of the command had passed in rear of the enemy’s works, when I had them faced by the left flank, forming two parallel lines of battle, the Second Division being on the right and the First Division on the left, and in this way I moved down the mountain side. We had encountered the skirmishers of the enemy some 200 yards before facing by the left flank, or our presence on the side of the mountain would not have been known to them. As soon as we were discovered they opened on the woods with artillery, doing but little execution, however. When within about half a mile of their batteries the charge began with shout. The intervening ground between us and the open country was covered with rocks, underbrush, and almost impenetrable cedar thickets, and intersected and broken by numerous ravines, so that by the time we arrived at the foot of the mountain and emerged from the woods our lines were completely broken, but, without halting to reform, with cheer upon cheer the charge was continued for a distance of four miles, up hill and down hill, across fields and through woods, after the disordered and rapidly retreating foe. On a prominent ridge, about one mile from the base of the mountain, where one of their main batteries was posted, the enemy made his most stubborn stand. Gallantly charging with irresistible impetuosity, my men soon drove them pell-mell from their position, when, abandoning their artillery and throwing away their small-arms and other incumbrances all along their lines, they fled in the utmost confusion and dismay. Here we were joined by part of General Ricketts’ division, of the Sixth Corps, and the two commands uniting followed the enemy until darkness closed the pursuit, some two miles beyond their works. I did not permit any of my men to remain with the artillery, from which we had driven the enemy in our advance, so as to get credit for its capture, as I needed every man at the front to make the rout of the enemy as total and complete as possible, and not at the rear to guard captured guns. 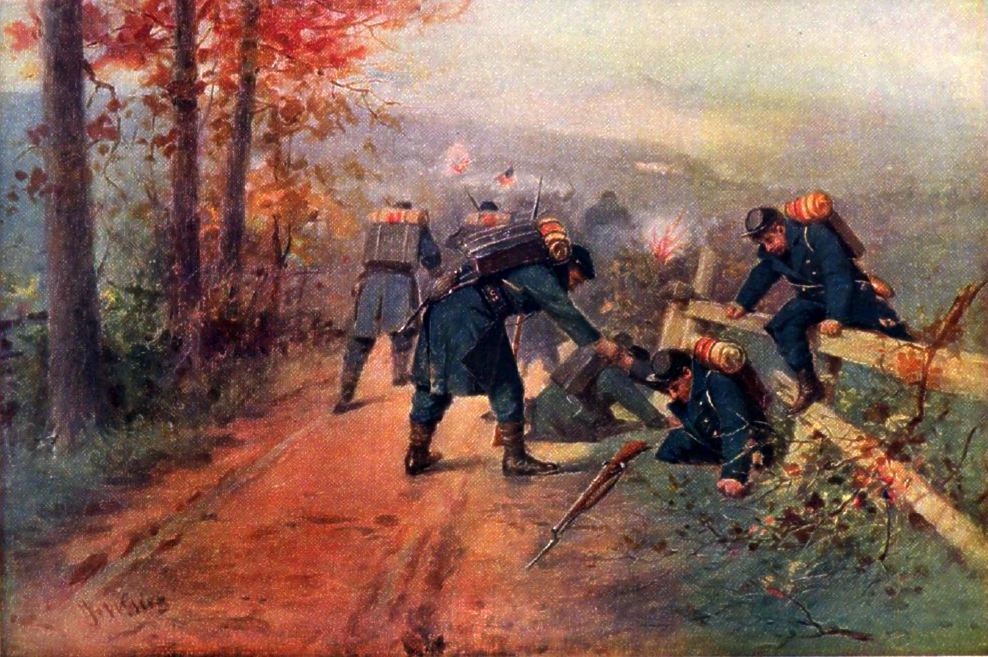 The success of my command in this engagement, as well as at the battle of Winchester, was mainly owing to the individual bravery of the officers and men, who are entitled to great credit. Special praise is due Col. Joseph Thoburn, First West Virginia Infantry, commanding First Division, and Col. R. B. Hayes, Twenty-third Ohio Volunteer Infantry, commanding Second Division, for their coolness and gallant conduct, being always in the front line directing the movements of their men; also to Surg. J. T. Webb, Twenty-third Ohio Volunteer Infantry, who, not having a sufficient number of wounded to attend to, was conspicuous at the front cheering on the men. Those individual acts of bravery that did not come under my immediate notice, but which are mentioned by my subordinates, I most cheerfully indorse. To the color bearers of regiments I tender my thanks for the example they set their fellow soldiers, both in this action and at Winchester on the l9th, as the Stars and Stripes in their hands were ever to be seen waving close upon the rear of the retreating enemy and in the first line of our advancing forces.

The loss of my command in this engagement was 8 killed, 153 wounded, and 1 missing.

I have the honor to remain, colonel, very respectfully, your obedient servant,

Crook’s 2nd division commander, referred to in this report as Colonel R.B. Hayes, was future U.S. president Rutherford B. Hayes. His reports on his command’s action at the Battles of Third Winchester, Fisher’s Hill, and Cedar Creek can be read by following this link. Captain William McKinley, Crook’s acting assistant adjutant general, was future president William McKinley.

Official Records of the Union and Confederate Armies in the War of the Rebellion, Series I, Volume XLIII, Part 1.

Sheridan in the Shenandoah Valley by Wesley Merritt. In Battles and Leaders of the Civil War, Volume IV, edited by Robert U. Johnson and Clarence C. Buel.