September 1863 in the Civil War 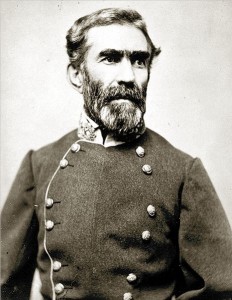 After an August of reduced activity, the action in the Civil War picked up again as the summer of 1863 came to an end.  The focus in September was away from Virginia, where there was little action. but there was significant fighting elsewhere, including a battle in northern Georgia that would  result in enormous casualties.

Although the Confederacy had been cut in to when the Union gained control of the Mississippi River, there was still a lot of fighting in the trans Mississippi region.  On September 1st, a Federal force under the command of Major General James G. Blunt captured Fort Smith in far western Arkansas.  Elsewhere in Arkansas, Major General Frederick Steele and his command forced Major General Sterling Price’s Confederates out of Little Rock on September 10th.  Little Rock was the fourth Confederate state capitol to fall into Union  hands, joining Nashville, Tennessee, Jackson, Mississippi, and Baton Rouge, Louisiana.  North of Arkansas in Missouri, endless skirmishing and smaller actions continued.

Further south, a Union naval squadron of four gunboats steamed into Sabine Pass at the mouth of the Sabine River on the Texas-Louisiana border on September 8th.  The gunboats were to take  out the Confederate defenses and clear the way for 5000 troops of the 19th Corps to land on the Texas shore.  The Lincoln Administration wanted to establish a Federal presence in Texas, in large part to keep France’s Napoleon III from expanding his influence from Mexico into the United States.  Napoleon III had established a French backed monarchy in Mexico in 1862.

This looked like an easy mission for the Union gunboats; only 44 men and half a dozen cannon inside a fort called Fort Griffin defended Sabine Pass.  But the Battle of Sabine Pass was a lopsided Confederate victory.  The Rebel gunners skillfully used their artillery, damaging and then capturing two gunboats and driving the others off.  The invasion was stopped with no Confederate casualties, while the Federals had 50 killed or wounded and 200 captured plus the loss of the two gunboats.

Near Charleston, South Carolina, Confederate forces abandoned Fort Wagner on Morris Island on September 6th, marking some progress for the Federal campaign to capture Charleston.  But the city continued to hold out against the Union army and navy bombardment, as did Fort Sumter in Charleston Harbor.  West of Charleston in eastern Tennessee, elements of the Union 23rd Corps under Major General Ambrose Burnside occupied Knoxville on September 2nd.

Also in Tennessee, General Braxton Bragg’s Army of Tennessee was in Chattanooga preparing for an attack by Major General William Rosecran’s Army of the Cumberland.  Bragg thought the attack would come from the direction of the

Tennessee River crossings north of town, but the Federal army crossed the river southwest of Chattanooga near Bridgeport, Alabama.  With Rosecrans now threatening to attack from the rear, Bragg withdrew from Chattanooga to Lafayette, Georgia, about 26 miles south of the city.  The Army of the Cumberland entered Chattanooga on September 9th, and continued south.

The alarmed Confederate government in Richmond immediately sent reinforcements to Bragg, including two divisions of the Army of Northern Virginia under the command of General James Longstreet.  Bragg, intending to place his army between Rosecrans and Chattanooga, deployed his army along the banks of Chickamauga Creek  September 18th.

Early in the morning on September 19th, the two armies clashed.  After a day of hard fighting, the Confederates had pushed the Federals back as far as the Lafayette Road, but the Union line had held .  Fighting resumed on the 20th,beginning  with an attack on the Federal left, an area under the command of Major General George Thomas.  Thomas had set up a solid defensive position, and the Confederates were unable to make much headway.  On the Union right, it was a different story. Acting on erroneous information, Rosecrans ordered Brigadier General Thomas Wood to move his division to plug a gap in the line.  But Wood was ordered to a place in the line where no gap existed; instead, a gap was created at Wood’s original position.  The gap opened just as Longstreet was beginning an attack, and his two divisions went through the opening, collapsing the Federal right.  About a third of the army, including Rosecrans himself,  was driven from the field in headlong retreat toward Chattanooga. 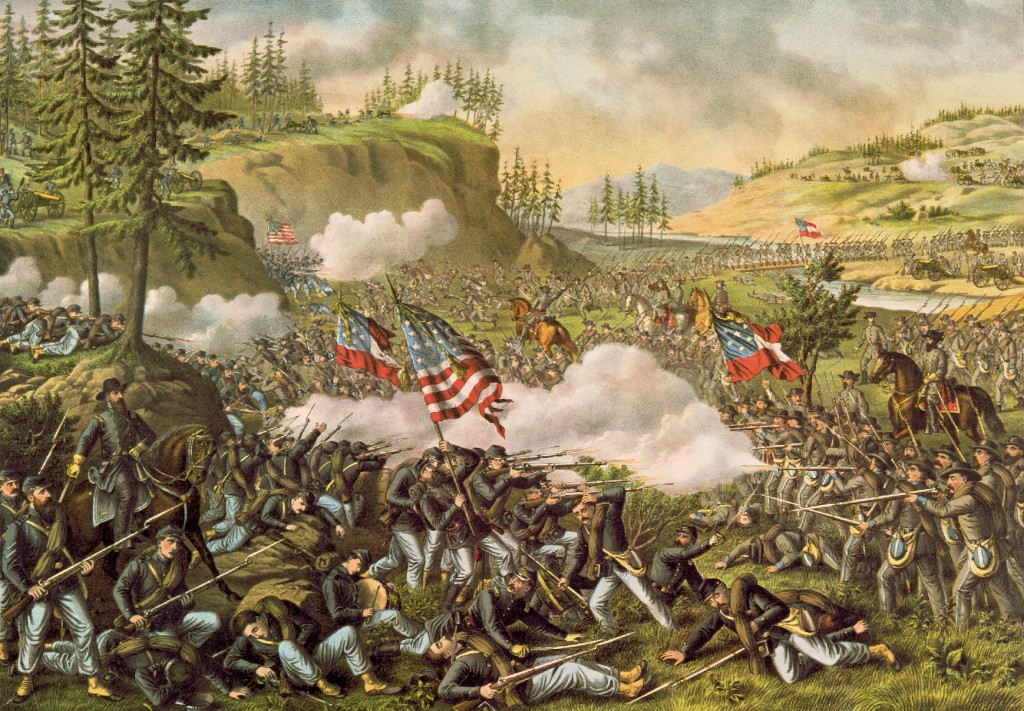 Meanwhile on what had been the Union left, Thomas took command of the remaining Federal troops and set up a defense on the higher ground of Snodgrass Hill and Horseshoe Ridge.  Here, Major General Gordon Granger brought his reserve division up as reinforcements. Thomas stubbornly held the position until nightfall, when the remaining Federals withdrew north to Rossville, Georgia.    For his actions that day, Thomas earned his nickname of “The Rock of Chickamauga”.

The decisive victory in the Battle of Chickamauga had cost the Confederates over 18,400 casualties, including 2312 dead.  Union losses were actually less, at about 16,200 total, with 1657 killed.   Losses at Chickamauga were second only to Gettysburg in terms of total casualties in a single Civil War battle.

The Federal prepared defensive positions in Chattanooga.  The Lincoln Administration took action and ordered the 11th and 12th Corps of the Army of the Potomac to reinforce Chattanooga.  Within days, the two Corps were on their way south via railroad.  Generals Alexander McCook and Thomas Crittenden were relieved of command on September 28th; and the removal of Rosecrans was contemplated.

After being on the losing end of the Battles of Perryville and Stones River, Bragg had finally won a big victory.  But rather than attack immediately while the Federals were still setting up a defense, Bragg elected to place Chattanooga under siege.  Never popular, he feuded with his generals, some of whom petitioned Jefferson Davis to remove Bragg from command.  The bickering continued for weeks.

With his troops and artillery posted on Lookout Mountain and Missionary Ridge, Bragg effectively shut down all supply lines for the besieged Federals in Chattanooga.  Rosecrans was ineffective in dealing with the siege; food was already in short supply as the month drew to a close.  In October, help would arrive both in the form of reinforcements, and with the arrival of Major General Ulysses S. Grant.