There are over 1300 monuments, tablets, statues, and markers of all types at Vicksburg National Military Park (as well as some outside the park boundaries). These monuments mark positions of individual regiments, honor unit

commanders, and describe events that occurred during the May 18th to July 4th, 1863 Siege of Vicksburg. Some monuments were financed and constructed by the states both north and south as memorials to their soldiers who fought in the siege and in the entire Vicksburg Campaign that began in earnest in December 1862 but had  preliminary events stretching back six months earlier. These state memorials include the largest monuments in the park.  Here’s a look at the state memorials of the Union states approximately in the order they are found on the National Park Service’s driving tour of the park. Click on the pictures to enlarge.

The Minnesota Memorial (pictured at right) is located a little more than half a mile from the park entrance.  This memorial is a 90 ft. high column of granite that was dedicated in 1907.  Three Minnesota infantry regiments-the 3rd, 4th , and 5th infantries, plus one battery of artillery,  participated in the Vicksburg Campaign.

The  Michigan Memorial (left) is a 37 ft. tall granite obelisk  located at the first tour stop at Battery De Golyer, 1.2 miles into the driving tour on Union Avenue. It was dedicated in 1916.  Michigan had seven infantry regiments, four batteries of artillery, and one cavalry regiment in the Vicksburg Campaign.

While taking the tour road, visitors soon notice that Illinois unit monuments seem to be everywhere, and for good reason. Illinois had by far the largest number of soldiers in the Vicksburg Campaign of any Union state, and it also has the largest memorial in the park. The granite and marble Illinois Memorial is a scaled down version of the Pantheon in Rome, and is located next to the Shirley House  at tour stop number 2, 1.7 miles down the tour road. The Shirley House is the only wartime structure within the park, and was the headquarters of the 45th Illinois Infantry during the siege.

On the walls inside this impressive structure are 60 bronze tablets with the names of all 36,325 Illinois soldiers who participated in the Vicksburg Campaign, arranged by regiment. Seventy infantry, 11 cavalry regiments, and 20 artillery batteries from Illinois participated in the campaign. The Illinois Memorial (below) was dedicated in 1906.

Driving another 1.2 miles down Union Avenue past Tour Stop 3 (Third Louisiana Redan) and Stop 4 (Ransom’s Gun Path) brings visitors to the Wisconsin Memorial. This monument is a 122 ft. tall granite column topped with a bronze statue of Old Abe the War Eagle, the famous bald eagle mascot of the 8th Wisconsin Infantry. The 8th was one of 19 Wisconsin infantry regiments in the Vicksburg Campaign, plus four artillery batteries and one cavalry regiment for a total of 9,075 soldiers. All the men’s names are inscribed on tablets around the concrete perimeter of the memorial. A bronze infantryman and cavalryman are on either side of the granite column. 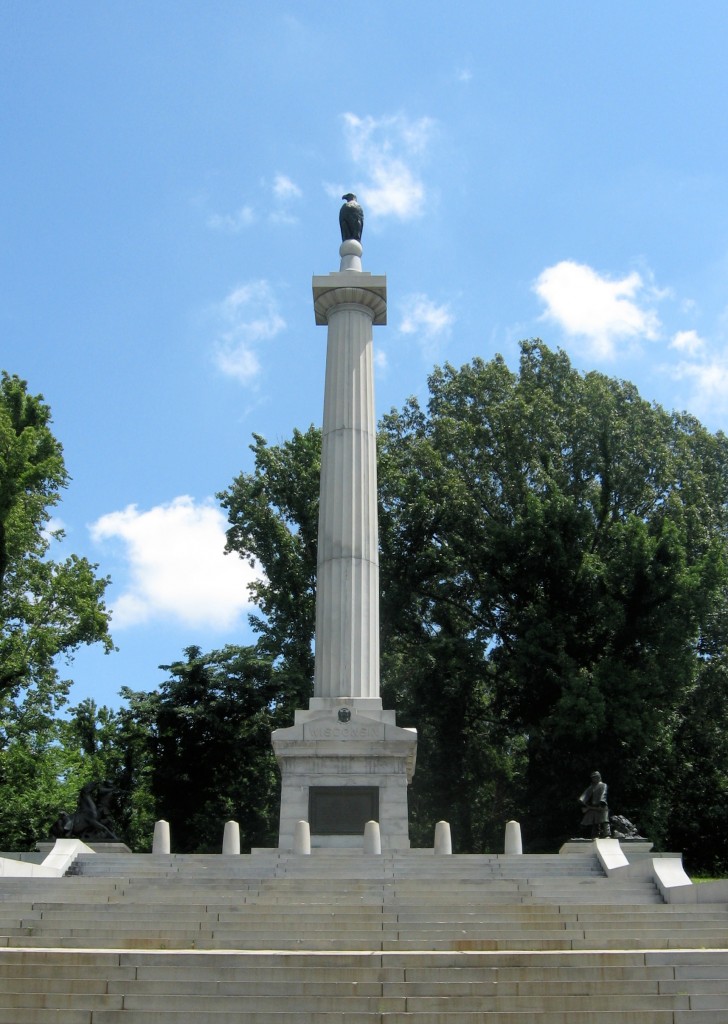 This tall monument has been known to take some lightning strikes, and on my first visit to Vicksburg several years ago the column had been taken down for repairs. It’s one of the more impressive monuments in the park, although I will admit some home state bias. The Wisconsin Memorial was dedicated in 1911.

The first four state memorials are large and not hard to spot, but the next one down the road is easy to mistake for an individual regimental monument. Actually, the West Virginia Memorial also serves as a regimental monument. The 4th West Virginia Infantry was the only unit from that state involved in the Vicksburg Campaign, and this bronze state memorial commemorates that unit. It’s located very close to, and on the right side, of the road just before Tour Stop 5, the Stockade Redan Attack. The memorial is a bust of the 4th’s commander at Vicksburg, Major Arza M. Goodspeed, who was killed in action on May 19th, 1863. The monument was dedicated in November 1922.

Continuing past Stop 5, the tour veers off Union Avenue to the right onto Grant Avenue. General Ulysses S. Grant had his headquarters nearby, and there are several state memorials in this area.

The  first state memorial along Grant Avenue is the Kansas Memorial, at 4.3 miles into the tour. It’s more abstract than the typical monument on a Civil War battlefield, consisting of three intersecting metal circles topped off with a metal eagle.  As explained by a stone marker in front, the bottom circle is the pre war unity of the nation; the broken center circle represents the unity of the country broken by war, and the top circle represents the union back together after the war. The eagle on top “typifies the glorious majesty of our country”. This monument is of a more recent vintage than most state memorials and was placed on the field in 1960. One infantry and two cavalry regiments from Kansas participated in the Vicksburg Campaign.

Two tenths of a mile past the Kansas Memorial is the Rhode Island Memorial. Like the West Virginia Memorial, this one honors the State of Rhode Island’s participation in the campaign and it honors the lone regiment from that state, the 7th Rhode Island Infantry. The monument is a bronze infantryman holding a rifle in one hand and the flag in the other. It was dedicated in 1908. The 7th Rhode Island was part of the 9th Corps, a well traveled corps that consisted  mostly of regiments from northeastern states (although five of Michigan’s regiments at Vicksburg were from the 9th Corps). The 9th Corps saw action in major campaigns in several states during the war and was in Kentucky in June of 1863 when it was sent to Vicksburg to help with the siege. The Rhode Island Memorial was dedicated in 1908.

Four other eastern states memorials are close to the Rhode Island Memorial. One of these is the large Pennsylvania Memorial, a granite monument with bronze images of the commanders of the four infantry regiments and one battery of artillery from Pennsylvania that served here. All five units were from the 9th Corps. The Pennsylvania Memorial was dedicated in 1906.

The final state memorial in the Grant’s Headquarters area of the park is the New York Memorial (left). This monument is a 40 ft tall granite obelisk dedicated on October 17, 1917. New York had three infantry regiments and one battery of artillery present during the siege; all four units were with the 9th Corps.

The next Union state memorial is at the 10.9 mile mark on the Confederate Avenue portion of the tour road, or about 6.3 miles from the New York Memorial, just past Tour Stop 10, the Stockade Redan. The Missouri Memorial actually is dedicated to the state’s soldiers who fought on both sides. It’s located where two Missouri regiments fought against each other, and this is depicted with Confederates on one side of the monument fighting against Federals on the other.  Between them is a large bronze angel called “The Spirit of the Republic”. The  Missouri Memorial was dedicated the same day as the New York Memorial, October 17th, 1917. Missouri had 19 infantry regiments, three cavalry regiments, one battalion of engineers, and 11 artillery batteries fighting for the Union during the Vicksburg Campaign.

It’s a 3.4 mile drive on the tour road between the Missouri Memorial and the next Union state memorial. The Indiana Memorial is 14.3 miles into the tour route on the south loop of Union Avenue, between tour stops 14 (Fort Garrott) and 15

(Hovey’s Approach) on the right side of the tour route up on a hill. It can be seen from the tour road, but to get a good look at it, visitors need to climb a few yards up the short but steep hill to where it stands overlooking the terrain.

This memorial is a full length bronze stature of Indiana’s wartime governor, Oliver Perry Morton. At first glance, a statue of a governor as a state memorial for a large military campaign may seem like a strange choice. However, Morton was a very staunch supporter of the Union and a big advocate for, and very popular with, his state’s troops. And there were a lot of Indiana troops in the Vicksburg Campaign. There were 30 infantry regiments, two cavalry regiments, and four artillery batteries from the Hoosier State in the Vicksburg Campaign. The Indiana Memorial was dedicated on June 16, 1926.

The state memorials up to this point have all been easily visible from the tour road, but the next one requires a short easy walk back from the road. A little past Stop 15, Hovey’s Approach, at about mile 14.6 of the tour route there is a small sign pointing  the direction  to the Kentucky Memorial. A three or four minute walk brings the visitor to the Memorial.

Like the Missouri Memorial, the Kentucky Memorial honors soldiers from both sides who fought here. Full size bronze statues of President Abraham Lincoln and Confederate President Jefferson Davis, both of whom were born in Kentucky, highlight the memorial. The monument is one of the newest in the park, dedicated on October 20, 2001. Three infantry regiments, one company of engineers, and one cavalry regiment from Kentucky fought for the Union in the Vicksburg Campaign.

The Iowa Memorial is 15.3 miles down the tour road and is on the right side of the road. A lot of Iowans fought in the Vicksburg Campaign, and the state’s memorial is suitably large. This granite monument is 64 feet wide and 29 feet tall at its highest point. Six bronze relief panels representing battles in the campaign are on the monument, and a bronze statue of a soldier carrying a flag and mounted on a horse is in the front center.
The Iowa Memorial was dedicated on November 15th, 1906 although it was not completed for six more years. As the sesquicentennial of the campaign approached, the State of Iowa allocated money for a restoration of the monument. As part of the sesquicentennial commemoration, the refurbished Iowa Memorial was rededicated on May 25th, 2013. Thirty-seven infantry regiments, three cavalry regiments, and three artillery batteries from Iowa served in the campaign.

The final Vicksburg Campaign Union State Memorial isn’t on the park tour road, and isn’t even in Mississippi. To reach the Connecticut Memorial, drive west on Interstate 20 across the Mississippi River into Louisiana, and exit I-20 at Exit 186 to Highway 80, and then turn right (east) on 80 and follow the signs to the Grant’s Canal site, located almost under an I-20 bridge.

In an early attempt to take Vicksburg in late June of 1862, troops of the Department of the Gulf (later the Union 19th Corps) led by Brigadier General Thomas Williams went up the Mississippi River from Louisiana to DeSoto Point across the river from Vicksburg. These troops were put to work digging a canal across DeSoto Point so that ships could bypass the Vicksburg artillery batteries. The 9th Connecticut Infantry was one of the units working on what was called Williams’  Canal.  Disease, high temperatures, and poor drinking water hampered the effort and the project was abandoned on July 24th.  Williams troops withdrew to Louisiana. In January 1863, Grant resumed the canal project but abandoned it in March.  A small part of the canal remains (now called Grant’s Canal) and the Connecticut Memorial is at this site. The 9th Connecticut was the only regiment from that state to participate in the Vicksburg Campaign.

This gray and black granite monument has unique etchings of photos of the regiment at Vicksburg and is the newest state memorial, dedicated on October 14th, 2008.

Notable for it’s absence of a state memorial is Ohio.  That state’s government opted to make sure all 39 Ohio units participating in the Vicksburg Campaign had an individual monument.

A Compendium of the War of the Rebellion by Frederick H. Dyer

Guide to the Vicksburg Campaign