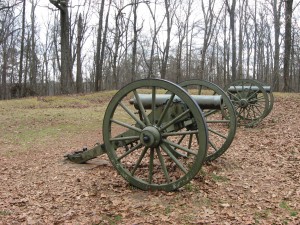 During the 1864 Atlanta Campaign, Major General William T. Sherman generally preferred to outmaneuver and outflank his Confederate adversaries rather than attack entrenched positions head on. He made an exception at the Battle on Kennesaw Mountain on June 27th.

The Confederates under General Joseph E. Johnston had constructed very strong trenches and defensive works on the mountain that commands the countryside near Marietta, about 20 miles northwest of Atlanta. From Kennesaw Mountain, Johnston could also provide support for his supply line to Atlanta, the Western and Atlantic Railroad. At first, Sherman tried to go around the Rebel left flank, and fought a sharp engagement at Kolb’s Farm on June 22nd.

Sherman then decided to change things up a bit. He believed Johnston’s defenders were spread out thinly on Kennesaw, and that an assault on the Confederate works could successfully break through the Rebel defenses. Sherman would launch diversionary moves against the Confederate flanks, and attack the center.

On the morning of June 27th, Sherman launched his frontal assault up the slopes of Kennesaw Mountain. The well dug in Confederate defenders turned back the assault in some bloody fighting. Sherman realized the assault was a failure and called it off before the morning was over. The Federals had about 3000 total casualties  while the Confederates had about a third of that. Despite being defeated in the battle, one of Sherman’s diversionary forces had advanced far enough to the Rebel left that the Federals threatened to capture the crossings over the Chattahoochee River, one of the last natural barriers  to the Union advance on Atlanta. This forced Johnston to pull out of his Kennesaw Mountain defenses and retreat across the Chattahoochee. 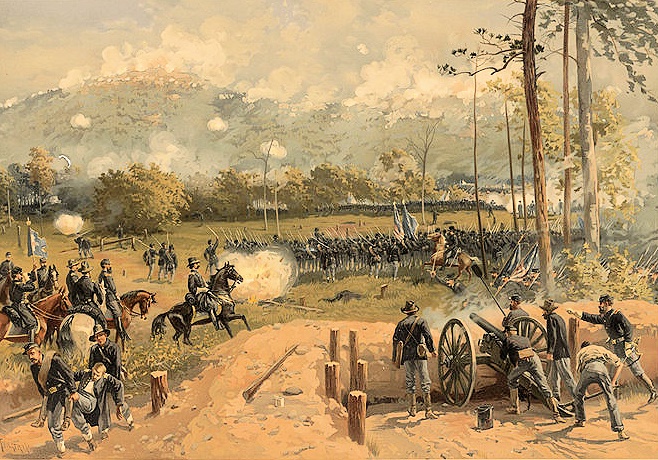 Kennesaw Mountain National Battlefield Park was established in 1917, and is a nearly 3000 acre green space in the midst of Atlanta’s northwest suburbs. Some well traveled roads pass through portions of the park, and the trails are popular with joggers. The park has no admission fee, and hosted over 1.9 million visitors in fiscal year 2012.

Despite the heavy use and its location in a large metropolitan area, the battlefield itself  is remarkably well preserved. There are several miles of Confederate trenches and earthworks, (and lesser amounts of Union trenches) especially in the Cheatham Hill area. Many of the roads that pass through the park existed in 1864, so vast swaths of historic ground were not paved over and lost in the postwar years.

As usual with National Battlefields, the place to start a visit to Kennesaw Mountain is at the park visitor center where you can get background information, view an informational film, and see museum exhibits. A seven stop driving tour of the park also begins there.

The first stop on the tour is the summit of the mountain. The road to the top begins behind the visitor center. The winding road is closed on weekends and holidays, but a shuttle bus operates on those 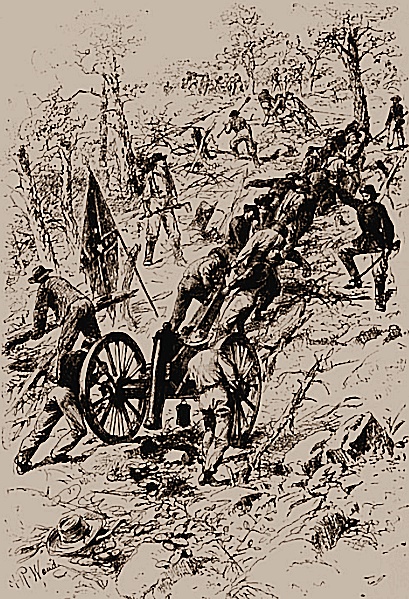 days. There is a small charge for the shuttle bus ride; see the parks website for current fees. There is also a trail that goes to the summit.

The view from the top gives the visitor a good perspective on the surrounding terrain. Several cannon are also at the summit; one can imagine the difficulty the Confederate artillerymen had in getting artillery up  the steep slope to the top. There is also a nice view of Stone Mountain and  downtown Atlanta in the distance.

The heaviest fighting occurred at Cheatham Hill and Pigeon Hill. There are tour stops for both.  Visitors will have to hike uphill to get to Pigeon Hill, but it’s worth the climb as several well preserved earthworks are visible. Brigadier General Morgan Smith’s division of the Union 15th Corps attacked here and was repulsed by Major General Samuel French’s Confederate Division.

The Cheatham Hill site is named after General Benjamin F. Cheatham, the commander of the Confederate forces there. Here, Brigadier General Jefferson C. Davis’ division of the 14th Corps fought their way uphill and attacked Cheathams’ well fortified, artillery supported Rebel positions. The Federals managed to reach the Confederate works, and the fighting was hand to hand until the Union attackers were driven off. The battle came to an end after this assault was thwarted and Sherman called off further action. 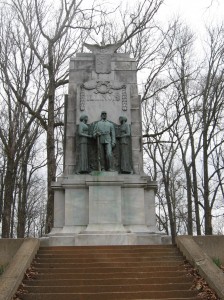 There are not a lot of monuments on the Kennesaw Mountain Battlefield compared to some of the other battlefield parks, but there is a large one at Cheatham Hill dedicated to the soldiers of Illinois.

Kennesaw Mountain National Battlefield is open seven days a week except for certain holidays.  It’s open during daylight hours only, which vary during the year. For more information, see the National Park Service Kennesaw Mountain website.