As May 1863 opened, the armies were on the move as important campaigns in both in the East and West were underway. There was significant action on the very first day of the month in Virginia and Mississippi. 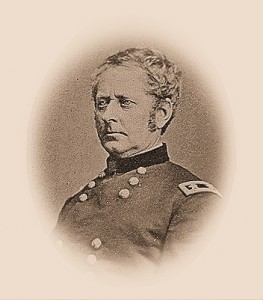 On May 1st, General Robert E. Lee put most of his Army of Northern Virginia on the road headed west out of Fredericksburg, Virginia. Major General Joseph Hooker had successfully marched three army corps around Lee’s left and was now behind him at Chancellorsville, at the intersection of the Orange Plank and Orange Turnpike roads a dozen or so miles west of Fredericksburg. Hooker had left two corps across the Rappahannock River from Fredericksburg, meaning Lee was between two sizable Union forces. Undaunted, the Confederate commander  left a division under Gen. Jubal Early at Fredericksburg and marched west with the balance of his command to confront Hooker.

Later that afternoon, Lee’s Second Corps commander, Gen. Thomas “Stonewall” Jackson, attacked Hooker’s lead elements on the Orange Turnpike, driving them back towards Chancellorsville. Hooker ordered his army to assume a defensive posture, to the astonishment and dismay of his subordinate commanders.  The momentum had shifted to the Confederates.

Lee and Jackson met that evening to plan the strategy for May 2nd. They decided to roll the dice and defy military convention by splitting their already outnumbered army into two parts.  Jackson would march 32,000 men around to the Union right and rear, while Lee would hold the Federals in the left and center with just 13,000 men. It was an all or nothing proposition; if the Union commanders discovered what was going on as it happened, the separated Confederate forces could be destroyed.

Jackson got underway about 7 a.m. the next morning. The heavily wooded terrain helped  shield the movement to a degree, but the Federals caught on that an apparent flanking movement was being attempted. Hooker alerted the 11th Corps commander, Major General Oliver Howard, that an enemy force threatened his position on the Union right.  Howard, however, didn’t take the reports of enemy activity seriously and did not prepare for an attack.  Based on the route Jackson took, which included some turns towards the south, some Union commanders erroneously thought Stonewall was retreating.

At about 5:45 p.m. Jackson was in position and attacked. The Confederates emerged from the woods and took the 11th Corps completely by surprise, driving the Federal troops back.  The 11th Corps paused and fought several delaying actions, but was overwhelmed and repeatedly forced to retire.

The attack continued until about 7:15 that evening when darkness brought an end to it.  Jackson, however, wanted to make a rare night attack and rode forward with some staff officers of his line to make a personal reconnaissance of the ground ahead. While returning to their own lines in the dark, Jackson’s party was mistaken for Union cavalry and fired upon by Confederate infantrymen. Three were killed, and others wounded , including Jackson who was hit in the left arm and right hand.

Jackson was taken to the rear for medical treatment. His arm was amputated, and was recovering until pneumonia set in.  Jackson died on May 10th.

Battle of Chancellorsville by Kurz and Allison

Although the Confederates had been very successful in the flank attack, the battle was not over. Hooker had been reinforced by the arrival of the 1st Corps, and held a formidable defensive position. But the Union commander withdrew from a strategically located clearing called Hazel Grove and the Rebels quickly placed artillery in that position.  With strong artillery support, Jackson’s corps, now under the temporary command of Gen. J.E.B. Stuart, attacked the Union positions. Although the fighting was intense, the Federals were finally forced to withdraw and set up a defensive perimeter to the north of Chancellorsville.  On May 4th and 5th, Hooker withdrew across the Rappahannock river.

Robert E. Lee had beaten yet another Army of the Potomac commander. Hooker’s battle plan was a good one, but the general had gone overly cautious at the wrong time, surrendering the initiative to the Confederates. The Union Army had more total casualties (17,304 vs. 13,460) but the number of killed and wounded was nearly the same. Union dead totaled 1694 with 9672 more wounded; Confederate dead numbered 1724 with 9233 wounded. The Federals had many more captured or missing ( nearly 6000) while the Rebels had about 2500.

Grant On the Offensive in Mississippi

While Hooker had his hands full at Chancellorsville, Major General Ulysses S. Grant was having success in Mississippi. Grant’s troops crossed the Mississippi River at Bruinsburg on April 30th and May 1st and marched northeast.

Grant’s forces encountered resistance almost immediately after beginning the march. On May 1st, the Union 13th and 17th Corps battled the Confederates under Brigadier General John S. Bowen at Port Gibson. The Confederates put up a stubborn fight, but superior numbers of Union troops carried the day. The victory came at cost of 875 total casualties; Rebel losses totaled 787.

The Federals continued to march northeast. The next significant action was at the town of  Raymond on May 12th, when a brigade under Brigadier General John Gregg attacked the Union’s 17th Corps. Gregg believed he was attacking a much smaller force, but held its own until the Federal advantage in manpower compelled him to retire.

Grant next marched to Jackson. General Joseph E. Johnston, who had just been ordered on May 9th to take command of the armies in the field in Mississippi, arrived in Jackson and found only about 6000 men available to defend the town against the two Union corps of Generals William T. Sherman and James B. McPherson that were approaching. Johnston ordered the town evacuated  with the removal of as many military supplies as possible. Confederate defense of the town continued long enough for the evacuation to be completed before  the defenders withdrew. The Federals cut the railroad line running from Jackson to Vicksburg, and destroyed other installations that could aid the Rebel armies before marching west towards Vicksburg on May 16th. 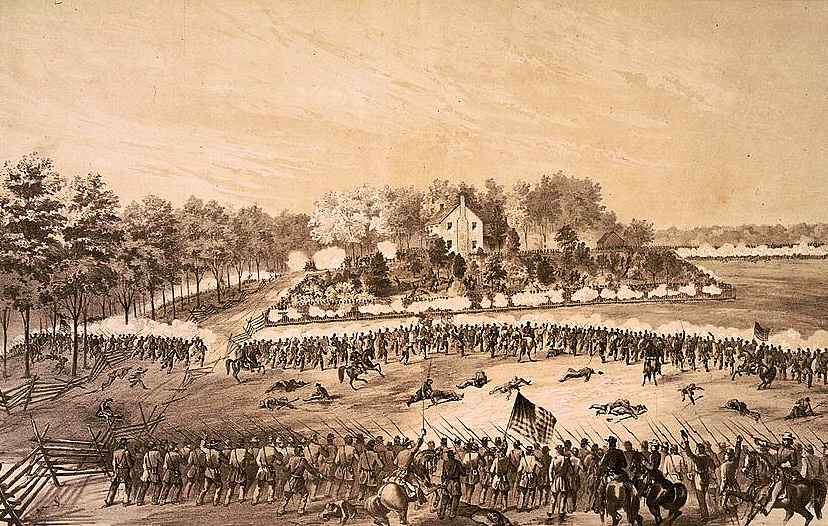 While Sherman was finishing up at Jackson, the 13th and 17th Corps battled General John C. Pemberton’s Confederates at Champion Hill, about halfway between Jackson and Vicksburg.  The Confederates were, at first, driven from the field by the Federals before counterattacking and turning back the Union troops. Grant then ordered his own counterattack that proved decisive.  The Confederates fought a delaying action at Big Black River Bridge on May 17th, but otherwise were in full retreat to Vicksburg. Grant was right behind them, and Union forces were at Vicksburg by May 18th.

Hoping to take the city before the Confederates could complete their defensive positions, Grant launched general  assaults accompanied by naval cannon fire from the Mississippi River fleet on May 19th and again on May 22nd. Both were repulsed. Grant then decided to commence siege operations.

About 110 miles south of Vicksburg, the only other remaining Confederate outpost on the Mississippi River besides Vicksburg prepared for a Union Army onslaught in mid May as five divisions of the 19th Corps closed in. The Rebel garrison at Post Hudson, Louisiana was under the command of Major General Franklin Gardner, while the 19th Corps was led by Major General Nathaniel Banks.

On May 27th, Banks ordered that a general assault be made against the garrison. The Union commander  had about 30,000 troops present, while Gardner had just 7500. Banks thought he could take Port Hudson quickly and then march north to join Grant at Vicksburg.  The Union attack force was organized into four groups, and they were to storm the Confederate works simultaneously. But Banks did not issue orders for a specific time to begin the assault, and the attack ended up being made in piecemeal fashion. Because of this, Gardner was able to shift his troops around as needed and repulse the Federal attacks.  Union   forces suffered nearly 2000 total casualties, including nearly 300 killed, while Confederate losses were less than 250 of all types.

The Union assault was a failure, but a milestone was reached in the action of May 27th. The 1st Louisiana Native Guard, consisting mostly of free blacks from New Orleans, and the 3rd Louisiana Native Guard, made up mostly of freed slaves, participated in the attack. It marked the first time that African American troops had fought in offensive operations during the war. As the event filled month of May drew to a close, more African American soldiers were taking to the field. On the 28th, the 54th Massachusetts Infantry, the first northern regiment of black troops, left Boston bound for the South Carolina coast. 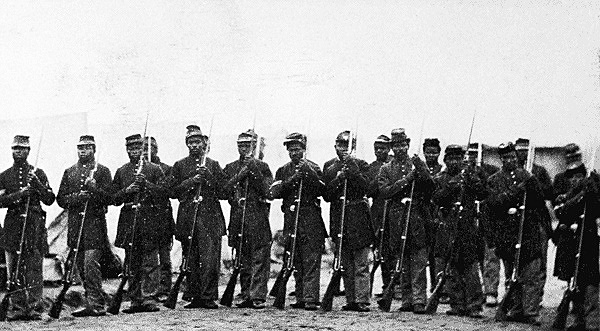