The battle lines during the June 1864-March 1865 Siege of Petersburg were not entirely static.  There were troop  movements and fighting on a significant scale in some instances; generally, these were Union attempts to disrupt Confederate supply lines and lengthen the siege line, thereby stretching already limited Southern resources even more.

One such action was the Battle of Hatcher’s Run on February 5th-7th, 1865.  Union Cavalry, along with the 2nd and 5th Corps, attacked the Confederates along Hatcher’s Run southwest of Petersburg. The Union objective was to interrupt the flow of supplies along the Boydton Plank Road, a wagon train route of increasing importance, and if possible, take the South Side Railroad, the last open rail line into Petersburg. The fighting was substantial, with the Federals suffering over 1500 total casualties, including 171 killed, while Confederate casualties were approximately 1000. Union forces were unable to take the railroad or cut off the Boydton Plank Road supply line, but they did extend the siege line further west. 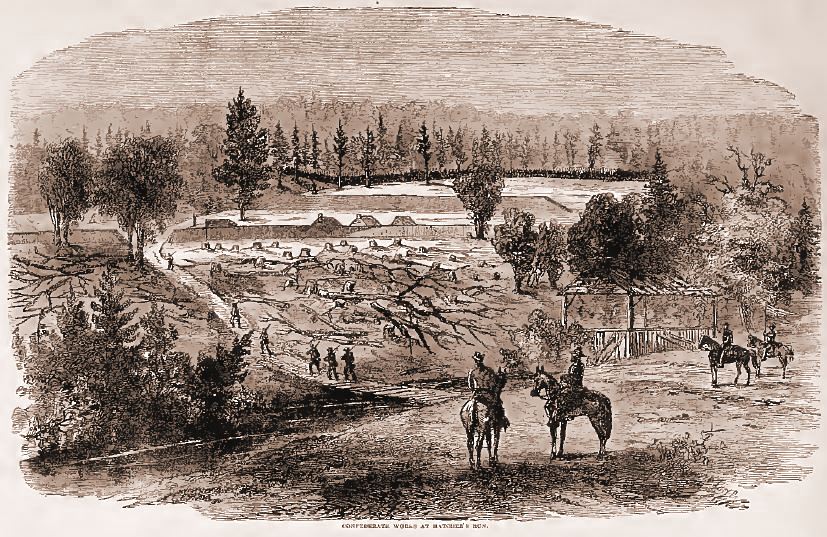 At this time, the 6th and 7th Wisconsin Infantries and the 24th Michigan Infantry were in a brigade in the 5th Corps. These regiments had been part of the Iron Brigade, but casualties and time had taken a toll and theorganization had essentially broken up. The 2nd Wisconsin Infantry had mustered out in the summer of 1864, although some men remained in the army and were placed in the 6th Wisconsin in November. The 19th Indiana merged with the 20th Indiana in September of 1864, taking on the name of the 20th. The remaining Iron Brigade regiments saw action at Hatcher’s Run as part of the 5th Corps. In his History of the Sauk County Riflemen, Lieutenant Mair Pointon of Company A of the 6th Wisconsin recalled the fighting at the Battle of Hatcher’s Run:

At 1 o’clock A.M. of the 5th, a picket detail was sent out from the regiment. In the early morning, the regiment moved from camp in light marching order, without tents or shelter, other than rubber blankets. We marched to Hatcher’s Run in the vicinity of Dabney’s Mill. The cavalry cleared the way. We advanced upon and captured the enemy’s works on Stony Creek, then made a further advance, halted and remained in that position for a short time, then falling back across Stony Creek, bivouacked for the night.

Before daylight of the morning of the 6th, we recrossed Stony Creek and formed the brigade in column, closed en masse in a field on the right hand side of the road. The skirmishers of the 2nd Corps engaged the enemy to our right. We built light works as we nearly always did when in line and waiting for developments; it gave us a rallying point in case we met disaster in front.

At 3 P. M. our division of the 5th Corps moved across the Creek, formed line of battle and advanced, driving the enemy about one mile, halted in the edge of a field and reformed our lines. The enemy advanced in force and made a furious attack on our left, which took in the left wing of our regiment, Company A, in the center of the regiment, being on the right of our firing line. After a severe struggle, the enemy forced back our troops on our left, exposing our left flank. Our regiment did not give ground nor cease to engage the enemy until the order to retreat was given, which was after the enemy was in our rear to the left.

We fell back to our works and reformed. Company A came off the field in good order under the command of Lieut. Pointon; every man in his place. The regiment moved over the creek and bivouacked for the night…..

In the afternoon of the 7th we crossed the creek and went back into the works, formed line of battle and advanced; while moving forward the enemy appeared upon our right flank. The 6th and 7th regiments changed front and swung around the right of our line and checked the enemy. Just before dark, we assaulted the works of the enemy and were repulsed….

We fell back a short distance, within musket range, reformed, lay down and waited for an expected counterattack by the enemy. From there we moved back to the right and built works. At midnight we moved back across Hatcher’s Run near to the Rebel lines, so near that we could not have fires. The night was very cold; we passed it as best we could but suffered intensely…

During the night of the 8th, we had a bitter experience, passing the most uncomfortable night during our term of service. No shelter or fires and the winter bitter cold. We were near to the enemy; if we conversed in ordinary tone of voice the bullets would come singing at us, making it dangerous to speak aloud.

At 6 A. M. of the 9th, a detail from the regiment under Lieut. Pointon was sent to corduroy the road and make it passable. The balance of the regiment built works on our newly established lines. At night, a ration of whiskey was issued to the men. We bivouacked as had to do every night, as we had no shelter.

At 6 A. M. on the 10th, our brigade began the return to our old camp, having to corduroy the roads in many places on account of their muddy condition. We arrived at our old camp at 7 P.M., awfully tired and nearly played out.  We found our camp all right and it looked like home.

The 6th Wisconsin’s losses were 13 killed, 81 wounded, and seven missing. The 101 total casualties were the most of any Union regiment in this battle.

The Iron Brigade: A Military History

Regimental Losses in the American Civil War by William Fox