When most people think of the origins of the Thanksgiving holiday in the U.S., they think of the Pilgrims and Wampanoag Indians celebrating at Plymouth in 1621.  While the celebration of Thanksgiving does go back to that time, the establishment of Thanksgiving Day as a national holiday  did not occur until 1863.  That year, Abraham Lincoln issued a proclamation establishing the last Thursday of November as a national day of thanksgiving.  Lincoln’s proclamation was the culmination of years of lobbying by writer and magazine editor Sarah J. Hale for the establishment of the holiday.

Born in New Hampshire in 1788, Sarah Hale became a writer and poet after she was widowed at age 34 in 1822.  In 1830, she published her second volume of children’s poems that included her most famous one–“Mary Had a Little Lamb”.  Sarah Hale used her position as editor of the popular women’s magazine Godey’s Lady’s Book to promote the establishment of Thanksgiving  as a national holiday by writing editorials to that effect starting in the 1830’s.  By the 1860’s a Thanksgiving holiday was not an unfamiliar event to many Americans.  Several states celebrated some form of the holiday at various times in the year.  But there was still no national Thanksgiving Day.

With Civil War raging throughout the country, Sarah Hale saw a national Thanksgiving holiday as a unifying event for the country, at least for those states in the Union.  She editorialized that the president could issue a proclamation establishing a day to be observed by every state.  She asked her friend, Secretary of State William Seward, to discuss the issue with President Lincoln.  In September of 1863, Sarah Hale wrote to Abraham Lincoln and requested he proclaim the last Thursday of November, which was the 26th in 1863, as  the National Thanksgiving Day. 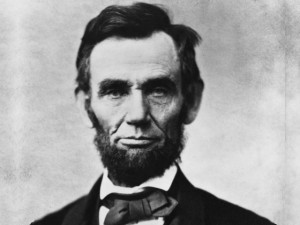 Sarah Hale’s years long effort to establish Thanksgiving as a national holiday finally paid off on October 3rd, 1863 when Abraham Lincoln issued a proclamation setting the last Thursday in November as “a day of thanksgiving and praise to our beneficent Father who dwelleth in the heavens.” Here is the text of President Lincoln’s Thanksgiving Day Proclamation, as recorded in  Volume III of Series III of the Official Records of the Union and Confederate Armies in the War of the Rebellion:

BY THE PRESIDENT OF THE UNITED STATES OF AMERICA:
A PROCLAMATION.

The year that is drawing toward its close has been filled with the blessings of fruitful fields and healthful skies. To these bounties, which are so constantly enjoyed that we are prone to forget the source from which they come, others have been added, which are of so extraordinary a nature that they cannot fail to penetrate and soften the heart which is habitually insensible to the ever-watchful providence of Almighty God.

In the midst of a civil war of unequaled magnitude and severity, which has sometimes seemed to foreign states to invite and provoke their aggressions, peace has been preserved with all nations, order has been maintained, the laws have been respected and obeyed, and harmony has prevailed everywhere, except in the theater of military conflict, while that theater has been greatly contracted by the advancing armies and navies of the Union.

Needful diversions of wealth and strength from the fields of peaceful industry to the national defense have not arrested the plow, the shuttle, or the ship; the ax has enlarged the borders of our settlements, and the mines, as well of iron and coal as of the precious metals, have yielded even more abundantly than heretofore. Population has steadily increased, notwithstanding the waste that has been made in the camp, the siege, and the battle-field, and the country, rejoicing in the consciousness of augmented strength and vigor, is permitted to expect continuance of years with large increase of freedom.

No human counsel hath devised, nor hath any mortal hand worked out these great things. They are the gracious gifts of the Most High God, who, while dealing with us in anger for our sins, hath nevertheless remembered mercy.

It has seemed to me fit and proper that they should be solemnly, reverently, and gratefully acknowledged as with one heart and one voice by the whole American people. I do, therefore, invite my fellow-citizens in every part of the United States, and also those who are at sea and those who are sojourning in foreign lands, to set apart and observe the last Thursday of November next as a day of thanksgiving and praise to our beneficent Father who dwelleth in the heavens. And I recommend to them that, while offering up the ascriptions justly due to Him for such singular deliverances and blessings, they do also, with humble penitence for our national perverseness and disobedience, commend to His tender care all those who have become widows, orphans, mourners, or sufferers in the lamentable civil strife in which we are unavoidably engaged, and fervently implore the interposition of the Almighty hand to heal the wounds of the nation, and to restore it, as soon as may be consistent with the Divine purposes, to the full enjoyment of peace, harmony, tranquillity, and union.

In testimony whereof I have hereunto set my hand and caused the seal of the United States to be affixed.

Done at the city of Washington this third day of October, in the year of our Lord one thousand eight hundred and sixty-three, and of the Independence of the United States the eighty-eighth.

By the President: ABRAHAM LINCOLN.

The Union  Army and Navy had no official feast on Thanksgiving Day of 1863, as the commissaries were not able to provide such a meal.  However, many military units were able to prepare a Thanksgiving meal on their own or with the help of civilian organizations.  This was especially true with regiments from New England states, an area that did have some local Thanksgiving traditions.

In accordance with the proclamation of the President of the United States, Thursday, the 26th instant, will, so far as military operations will permit, be observed by this army as a day of thanksgiving for the countless blessings vouchsafed the country and the fruitful successes granted to our arms during the past year.

Especially has this army cause for thankfulness for the divine protection which has so signally shielded us; and let us with grateful hearts offer our prayers for its continuance, assured of the purity of our cause and with a firm reliance on the God of Battles.
By command of Major-General Burnside:

Thanksgiving for the Civil War Soldiers

Sergeant Charles C. Paige of the 11th New Hampshire Infantry was at Knoxville, and noted that it was quiet that day and the men were “in good spirits” .   But the men under siege there knew the enemy was planning an attack, which toned down the celebration considerably.  “Considering it from the usual standpoint I should say that I have not had much of a Thanksgiving day,” Paige recorded.

In Virginia, the Army of the Potomac was engaged in the Mine Run Campaign.  The regimental historian of the 1st Maine Cavalry recalled that “the day was cold and raw, and the marching tedious … they took their Thanksgiving dinner of cold hard bread and cold water, on a cold day, riding along in the enemy’s country … But it was wonderful how quickly the cheerful camp-fire and the cup of hot coffee put life and new spirit into them.”

The 37th Massachusetts Infantry marched ten miles on muddy roads that day.  An officer remembered  “our Thanksgiving dinner consisted of bread and butter.”

The 4th Maine Battery of Light Artillery was on the march that day as well.  A member of that unit recalled “as we ate our Thanksgiving dinner of hardtack and raw pork as we moved along (not stopping long enough to build a fire to make coffee or cook our meat) we thought of our friends who were gathered around the Thanksgiving table at home, and how much we would enjoy being with them.”

Lincoln issued another Thanksgiving Day proclamation in 1864, and other presidents would continue issuing proclamations.  In 1871, Sarah Hale began a push to have Congress pass a law making Thanksgiving Day a national holiday, rather than have it proclaimed by the president.  She would not live to see this fulfilled, dying in 1879 at age 91.  In 1941, the U.S. Congress finally passed a bill establishing the fourth Thursday in November as the national Thanksgiving Day.  President Franklin Roosevelt signed the bill into law on November 26th, 1941.